In western Himachal Pradesh, the hill station of Dalhousie is full of old world charm and holds lingering echos of the Raj era. Its a very beautiful hill station covered with thick pine forest you can rejuvanate yourself here in the lap of mother nature.  It covers an area of 14 sq. km. and is built on five hills - Kathlog, Patreyn, Tehra, Bakrota and Balun. It is named after the British governor General of the 19th century, Lord Dalhousie. The town's average height is 2036 m, and is surrounded by varied vegetation - pines, deodars, oaks and flowering rhododendron. Dalhousie has charming colonial architecture, including some beautiful churches. Its location presents panoramic views of the plains and like a long silver line, the river Ravi twists and turns below Dalhousie. The spectacular snow-covered Dhauladhar mountains are also visible form this enchanting town.

Lord Dalhousie during many of his sojourns in these Hills chanced upon this charming spot which was later to bear his name. His admiration to this place led him to establish one of the prime Hill Resorts of India in the year 1854.Lord Dalhousie founded the town of Dalhousie because of its fresh and peaceful atmosphereand healthy surroundings enchanted him. The English visited this place for their vacations. The bungalows here are all made in theEnglish style. Situated in the Dhauladhar mountain range, on 5 mountains, Dalhousie has thick forests of pine and deodar trees. Many picnic spots can be found here.

CLIMATE : In winter, the temperature can drop to freezing point when heavy woolens are required. The summer temperature are mild and light woolens / cottons are recommended.

CHURCHES : There are four beautiful churches in Dalhousie. These are St. Andrew's Church and St. Patrick's Church at Balun, St. Francis church at Subhash Chowk and St.John's Church at Gandhi Chowk.

SUBHASH BAOLI (1 km) : It was at this enchanting spot surrounded by majestic trees, that Netaji Subhash Chandra Bose spent time in 1937, contemplating and meditating.

PANCHPULA (3 km) : This is a picturesque spot where a stream feed a series of pools. A monument has been built here in memory of the freedom fighter, Sardar Ajit Singh.

KALATOP (10 km) : This wild life sanctuary is a home to the 'ghoral' and Himalayan black bear.

DAINKUND PEAK : Dainkund Peak is a stunning tourist place, perched at an altitude of 2755 meters, is the supreme mount in Dalhousie.
From this peak tourists can relish 360° view of the entire valley. The noise of the breeze passing through the trees makes a musical sound, due to which this peak has also obtained the name, the singing hill.

AJEET SINGH MEMORIAL : Sardar Ajit Singh, a great freedom fighter, breathed his last on the day India gained independence, 15th August, 1947. His 'Samadhi' is located at Dalhousie's Panjphulla, a picturesque spot with a natural tank and water flowing under small bridges from which the place takes its name. At Panjphulla, there is a 'Samarak' in the memory of Sardar Ajit Singh. On the way to Panchpula is Satdhara springs gurgling with refreshing water, believed to contain some medicinal properties.Panchpula stream is the main source of water supply to Dalhousie and Baloon.

CHAMBA : 44 Kms from Dalhousie the erstwhile capital of the famous Chamba State is a worth visiting place, it has one of theoldest Temples of the country and the finest Art & Crafts of the Pahari Style. Chamba, the land of gods is rich in culture and inhabited by colourful people. Fascinated by its breathtaking landscapes, beauty and rich culture, the historians have describedChamba as Achamba ( the Charming ).

BHURI SINGH MUSEUM : is situated in the heart of Chamba town. It was founded in 1908 to collect and preserve the scattered cultural heritage of Chamba State.

CHAMARA DAM : 36 Kms is from Dalhousie and on the way to Chamba. This is the reservoir of the Chamera dam built over the river Ravi. Chamera lake is an artificial lake came into existence as a consequence of Chamera Hydroelectric project. The Dam site enjoy very sharp fluctuations in climate between April to June. During the day it can get very hot (around 35 degree centigrade) though by the evening, temperatures fall to between 18 to 20 degree centigrade.

Dalhousie is 485 km by road from Delhi and 52 km from Chamba. The closest railhead is Pathankot, 80 km away. The airport at Gaggal in Kangra is at a distance of 135 km . Taxis and buses are easily available from these places. 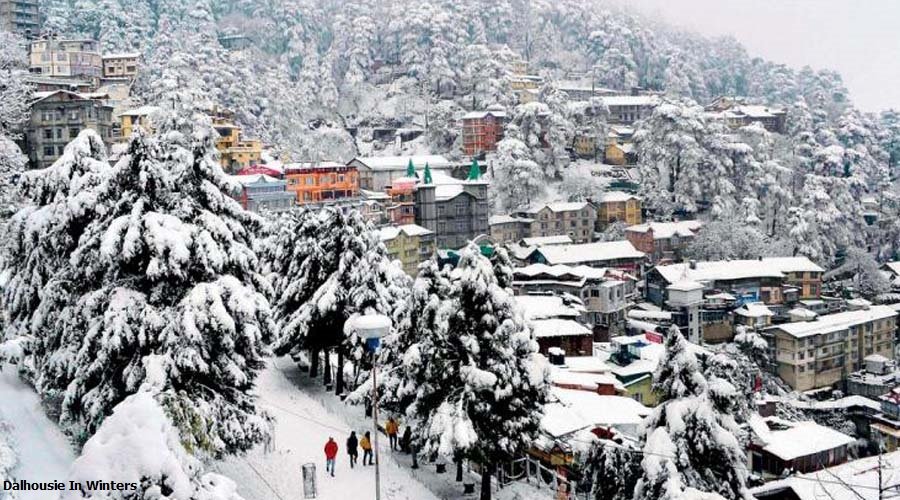