The historic town of Mandi (800 m) is built along the banks of the river Beas. It has a rich culture and history represented by its temples which are a major tourists draw. Mandi is known for its 81 old stone temples and is often called the “Varanasi or Kashi of Himachal”. Mandi is an important trading centre situated on the Pathankot-Kullu road. Mandi district is also a famous tourism place in Himachal Pradesh, India. The town is also the gateway to Himachal's most famous valleys - Kullu, Manali, Lahaul and Spiti. Mandi is also on the Kullu-Shimla road via Bilaspur. It is the headquarter of the district. The entire town has a huge sprinkling of temples. Mandi Town formerly known as Mandav Nagar, also known as Sahor, is a major city and a municipal council in Himachal Pradesh is situated 153 kilometres north of state capital Shimla and 191 Km from Chandigarh.

Mandi formerly known as Sukhet which founded in 765 AD. The area had been under control of Ranas or Thakurs. Rewalsar near Mandi is got mention in the Skanda Purana as a sacred place of pilgrimage. Karanpur, a small village near Mandi is said to have been founded by Karan a hero of Mahabharata. According to the Tibetan tradition, Padam Sambhav (750-800 AD), the great Buddhist Priest, who was summoned by the king Tisong-De-Tsen of Tibet for preaching Buddhism, hailed from Zahor, took shelter in the caves near Rewalsar.

Practically synonymous with Mandi and located in its very heart, this is as old as the town itself and dates back to the 1520s. In March, the festival of Shivratri is a major event and the Bhootnath temple is its focus. For an entire week the town celebrates the arrival of hundreds of local deities on elaborately decorated palanquins.

Also called the temple of Tarna Devi, this is high on Tarna Hill which rises above the town. Built In the 17th century by Raja Syama Sen after particularly trying times when the goddess gave him success.

Various Other Temples of mandi Town

With in the Mandi town there are various Temples and shrines. Apart from the emotions they evoke, they are also a wealth of classical architecture and ornate sculpture. Many of these are devoted to Lord Shiva, at the Triloknath Temple he is depicted as the lord of the three worlds, at the Panchvaktra He has five faces, expressing His five aspects. At the Ardhanarisvara Temple, Lord Shiva appears in a composite form with right half as a male and the left half as a female symbolizing the male and female principles of cosmic evolution. There are several exquisite temples along the College road, and the bank of the Beas is lined with many more. At the Gyarah Rudra Temple, the day the famous Amarnath darshan takes place, the temple is decorated to resemble as Amarnath Cave. The other places of interest within Mandi are the Rani Amrit Kaur Park, the District Library Building and Vijay Kesari Bridge.

This lake lies 45 km north of Mandi, with a three storied pagoda like temple dedicated to the sage Prashar. The Lake is located at an height of 2730 m above sea level. With deep blue waters, the Lake is held sacred to the sage Prashar and he is regarded to have meditated here. Framed by snow-capped peaks and looking down on fast flowing river Beas, the Lake can be approached via Drang. Every year in the month of June, famous traditional fair is held here. Several camping sites are also located here and it is the base for numerous easy & hard treks.

About 25 km from Mandi, 14 km from Ner Chowk is the Rewalsar lake, famous for its floating islands of reed. It is believed that all of them can be moved by prayer or breeze. The place is held sacred by Hindus, Sikhs and Buddhist as the place holds together Temples, Monestries and a Gurudawara. Legend has it that the great teacher and "tantric", Padmasambhava used his enormous powers to take flight to Tibet from Rewalsar. Also known as Guru Rimpoche, the precious Master, it was under Padmasambhava’s influence that Mahayana Buddhism took root in Tibet and at Rewalsar waters, his spirit is said to reside in the tiny island of floating reed that drift over the waters. There are three Buddhist monasteries at Rewalsar.

Monestries In Rewalsar : At opposite ends of the lake there are two Tibetans monasteries. The Bhutanese also have one.

Gurudwara In Rewalsar : This Gurudwara was built in 1930 by Raja Joginder Sen of Mandi. It commemorates Guru Gobind Singh's visit, when he sought to evolve a common strategy with the hill rulers against the Mughal emperor Aurangzeb.

Temples In Rewalsar : At Rewalsar there are three Hindu temples. These are dedicated to the sage Lomas, Lord Krishna and Lord Shiva.

Janjehi is one of the beautiful and most virgin tourist place in mandi District where tourist find serene beauty of nature. Ii is also paradise of hikers, offering treks upto height of 3300 mts. Is situated at a distance of 67 kms. From Mandi Town. It has all the elements that make it paradise for trekkers. It offers paths under thick deodar forest, beautiful scenery, waterfalls and springs, wild life etc..

Shikari Devi temple is near to Karsog Valley, Janjelhi valley, Bagsaid Valley in the mandi District with beautiful view of pine, deodar woods and apple orchards. The Shikari Devi Temple is positioned at a height of 2850 meters above sea level in the state of Himachal Pradesh. It is extremely difficult to trek up to the Shikari Devi Temple from Janjheli, Bagsaid, Kandha or Karsog vally. You can enjoy a beautiful trip with different routes to reach upto ancient shrine of the Shikari Devi Temple located at the peak of the hill.  The Trek to the peak is so beautiful that despite of being a very tough trek the beautiful landscape and the untouched beauty on the way will never feel you tired.

By Air The nearest airport to Mandi is the Kullu Airport at Bhuntar, at a distance of about 75 km. This is a small domestic airport and cannot house large aircrafts. Flights to Kullu are available only from Delhi and Shimla. Anyone interested to come to Mandi by air needs to first take a flight to Delhi. Delhi is well connected to different parts of the country as well as to most of the important cities of the world. From Delhi, you need to take a connecting flight to Kullu (about 90 minutes journey). Flights to Kullu are prone to delays and/or cancellations in the monsoons and winter due to adverse weather conditions. Kullu to Mandi has to be covered by road (about 1hr 30 minutes journey).

By Road From Chandigarh the buses to Mandi are available at Sector 43 bus stand. The other choice from Chandigarh to Mandi is to travel by taxi. The distance between Chandigarh and Mandi is 191 kms. This distance can be covered in approximately 6 hrs by bus. By taxi, it usually takes around 5 hrs. From Delhi also buses are available for Mandi from Kashmiri Gate ISBT in regular intervals.

By Train: The alternative to reach Mandi from Delhi is to travel by train up to Kiratpur Sahib by Delhi-Una Himachal express (Train number 14553) or to reach upto Chandigarh via train which is better connected. All the buses coming from Delhi and Chandigarh towards Mandi, pass through Kiratpur Sahib. 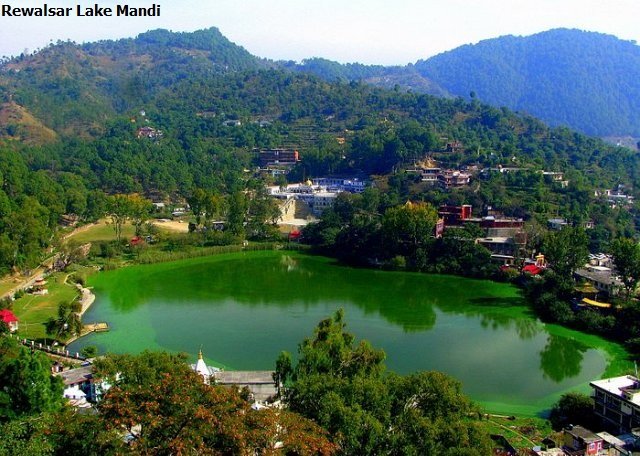