Rajasthan's beautiful Pink City Jaipur, was the stronghold of a clan of rulers whose three hill forts and series of palaces in the city are important attractions. Known as the Pink City because of the colour of the stone used exclusively in the walled city, Jaipur's bazaars sell embroidered leather shoes, blue pottery, tie and dye scarves and other exotic wares. Western Rajasthan itself forms a convenient circuit, in the heart of the Thar desert which has shaped its history, lifestyles and architecture.

Founded in AD 1727 by Sawai Jai singh II, Jaipur the capital of Rajasthan is popularly known as the Pink City with broad avenues and spacious gardens. The capital of Rajasthan, Jaipur is steeped in history and culture. Here the past comes alive in magnificent forts and palaces, blushed pink, where once lived the maharajas. The bustling bazaars of Jaipur, famous for Rajasthani jewellery, fabric and shoes, possess a timeless quality and are surely a treasure-trove for the shoppers. This fascinating city with its romantic charm takes you to an epoch of royalty and tradition.

Around half an hour's drive from the city center, like something out of a fairy tale, Amber Fort is set on a hill top overlooking Maota Lake. It was the original home of Rajput royalty until Jaipur city was constructed, and contains a number of breathtaking palaces, halls, gardens, and temples. Inside, the elaborate mirror work adds to the grandeur. The fort entrance is reached by walking up the hill, going in a jeep, or taking a lurching elephant ride. The evening sound and light show, which brings alive the Fort's history, is impressive. If you're interested in the art of traditional block printing, also don't miss the Anokhi Museum near Amber Fort. Workshops are held there.

Upon visiting the magnificant City Palace, it's easy to see that the royal family of Jaipur was one of the richest in India. The huge complex of courtyards, gardens, and buildings blend both Rajasthani and Mughal architecture. The Peacock Gate is exquisite, and contains an alluring display of detailed workmanship featuring bright peacocks. Today, the royal family lives in the graceful Chandra Mahal (Moon Palace) bordering the courtyard. Also inside the City Palace complex is a museum, art gallery, and interesting displays of royal costumes and old Indian weapons.

“Hawa Mahal" Palace of the Winds

The intricate and fascinating facade of the Palace of the Winds is probably Jaipur's most recognized building. Constructed in 1799, it has five floors that contain rows of small windows and screens. Wind used to flow through the openings, giving the palace its name. However, the wind has now gone from the Wind Palace as most of the windows have been sealed shut. Legend has it that the palace, which overlooks the main street of Jaipur's lively Old City, was built so that the women of the royal household could watch the streets below without being observed. A panoramic view can be had from the top of the building.

Jantar Mantar, built by King Jai Singh II between 1727 and 1734, literally means "calculation instrument". More than just a curious collection of sculptures, each structure at the intriguing Jantar Mantar observatory has a specialized astronomical function. There are 14 structures in total, which measure time, predict eclipses, and track stars. The most impressive one is the huge Samrat Yantra sundial. At a height of 90 feet (27 meters), it has a shadow that moves roughly the width of a person's hand every minute. It's a profound display of how quickly time does in fact go!

The massive Jaigarh Fort was built in 1726 and holds great appeal for military lovers. Flanked by towering gateways and watchtowers, it contains the world's largest cannon on wheels. The cannon has never been fired though, and neither has the fort been captured. As a result the fort has remained intact over its long life, and is very well preserved. Infact, it's one of the best-preserved military structures of medieval India. Jaigarh doesn't have the delicate interiors of Amber Fort, and therefore appears as a real fortress. Climb the Diwa Burj watchtower to get an excellent view over the plains.

Nahargarh Fort, also known as Tiger Fort, is perched high on the rugged Aravali Hills overlooking Jaipur city. The fort was built 1734 to help defend the city. It found fame in 2006, after many scenes from the movie Rang De Basanti were filmed there. Nahargarh Fort offers spectacular views, which are best seen at sunset. It also makes a great place for a picnic as there's a cafe on the premises, which serves beer and snacks until 10 p.m. The fort looks particularly attractive at night when it's lit up.

This old and famous museum was modeled on the Victoria and Albert Museum in London. Its collection includes portraits of local kings, costumes, woodcarvings, paintings, and arts and crafts. Unfortunately photography isn't allowed.

(6.5 Kms on the way to Amer) This newly restored temple and garden, near Jal Mahal, has beautiful gardens and is popular picnic place. This is also beautiful location for film shooting.

Bus : Regular  buses ply from Jaipur to the above places and Alwar, Kota, Sariska, Mathura, Indore,  Chittorgarh and Barmer. 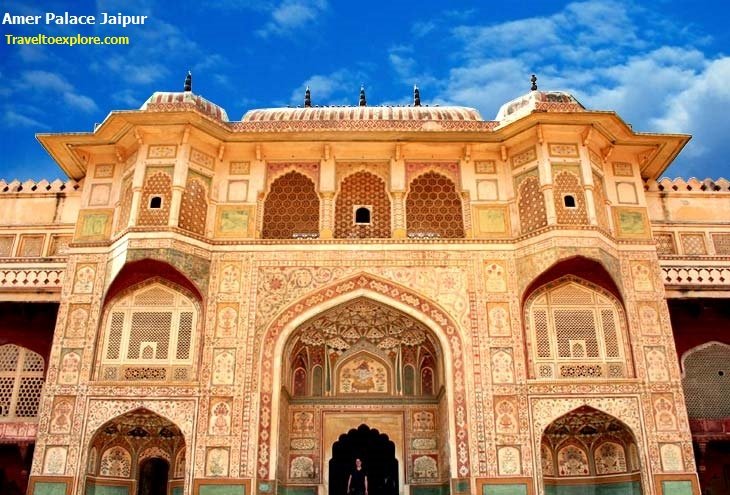 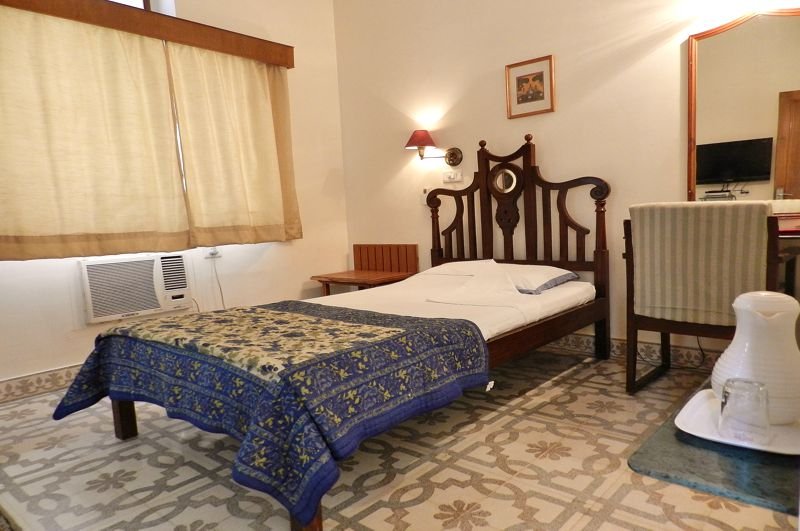 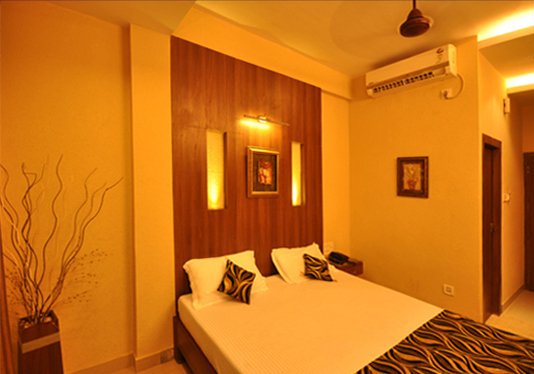