The Golden City of Jaisalmer in Rajasthan is simply unmatched. It was the part of the famous Silk Route. The splendid Jaisalmer Fort stands proudly on its land and narrates the stories of the valor and chivalry of the Rajput rulers. Jaisalmer still retains its medieval charm, which is evident in its colorful narrow streets, splendid forts and palaces of Rajasthan, opulent havelis and bazaars.

The otherwise barren land of Jaisalmer comes alive once every year during winters. It is the time when the festivities of Desert Festival slowly start engulfing the Desert City. During the festival in Jaisalmer, the city displays the wealth of its culture and traditions to the rest of the world. The festival expresses the people's zeal for the life and is a colorful extravaganza of fun, frolic, laughter and adventure.

Gadisar Lake is a rainwater lake which supplies water to the city. Sar means a lake. King Ghadsi of Jaisalmer got it made 650 years ago with the help of the people. It is surrounded by temples and tombs of saints. Boat rides are offered. Nearby is the desert cultural centre and a local museum built out of the collections of a local schoolteacher, Mr. N.K. Sharma. This centre conducts puppet shows in the morning and evening. There are people who will try and sell you bread to feed the huge number of catfish in the lake.

One of the most magnificent attractions is the Jaisalmer Fort, also known as "Sonar Qila," due to the yellow stone with which it was built. Colourful shades of the setting sun and golden hues of the desert ambience give a fairy tale look to this mega structured fort. The interior of the fort is amazing. It is a 'working fort,' meaning that unlike every other fort in India, there are people living and working within its walls. Tourists can also visit many havelis of rich merchants, which are also having a touch of great classical interior and design.

There are numerous lookouts (at least five) within the fort that give a great view out across the city and desert.

A tour of the royal section of the fort is available from a starting point just to the right up the stairs as you enter the main square of the fort). The audio tour takes about one hour and 15 to 30 minutes. At the final few sections, there are two advertisements in it - not a must, the view is what you come for. It is however not possible anymore to opt out of the audiotour, it is included in the Rs 500 ticket (July 2015). They do charge Rs 100 extra per camera.

Tanot Mata temple, is the temple you have seen many times in the ‘Border’ movie. Tanot Mata temple remained untouched despite of the heavy shelling by Pakistan during Indo-Pak war of 1971. Goddess Tanot is believed to be the incarnation of Goddess Hinglaz which is located in Lasvela district of Bluchistan. In 847 AD foundation of Goddess Tanot was kept and idol was installed. Generation of Bhati Rajput take care of this temple.

Earlier during Indo-Pak war of 1965, Tanot mata temple did not even touched by targeted bombs by Pakistan Army whereas all the bombs did not explodes which falls in the vicinity of the temple due to Goddess Tanot divine power. Those unexploded bombs now can be seen in the Tanot mata temple museum. After war, Border Security Force of India is continue to manage this holy temple till date. Located very close to battle site of Longewala- Jaisalmer , visitors cannot go beyond the temple.

Now Tanot mata turn out to be a popular tourist destination and a perfect place to explore in the Thar desert. Best time to visit Tanot Mata temple is October to March. Tanot Mata temple is located at 150 km from Jaisalmer city and one can reach only by hiring private taxi which takes about 2 hours.

Kuldhara in Jaiselmer known to be a ghost village, lying 17km west of Jaisalmer, Kuldhara has a story. Some 300 years ago, it used to be a prosperous village of Paliwal Brahmins under the state of Jaisalmer. According to the legend, the evil eyes of Salim Singh, the powerful and debauched prime minister of the state, fell on the daughter of the village head and he desired to marry her by force. He threatened the village with grave consequences if they did not adhere to his wish. Instead of submitting to the order of the tyrant, the Paliwals held a council and people of 85 villages left their ancestral homes and vanished. But this was not all before leaving, they put a curse on Kuldhara that no one will ever be able to settle in their village thereafter. To this date, the village remains barren left almost the same as its inhabitants had left it centuries ago. It is also said that people who have tried to stay there at night have been chased away by strange paranormal phenomenon.

There are seven beautifully carved temples built inside the fort walls. These temples were built between the 12th century to 15th century. All the temples are connected by walkways and corridors. It is compulsory to remove your shoes and all other leather articles (belts, wallets, purses, etc.) before entering any Jain temple. The very first temple which a tourist can visit is dedicated to Chandraprabhu, who is the eighth tirthankar (Jain God). The symbol of the God Chandraprabhu is the moon. This temple was built in 1509. It is built with fine stones. They are only open from 8am to midday. Leave a good hour to see them. Entry is Rs 200 (including camera). Take your shoes off and leave them near where you bought the tickets (a small tip is welcomed).

Evoking a vision of chivalry and valor, the famous Jaiselmer havelis were built by wealthy merchants. Famous for their intricately- carved facades, the workmanship of Jaisalmer's Havelis present a beautiful amalgam of Rajput architecture and Islamic art. Some of the famous havelis of Jaisalmer are as below.

Salim Singh ki Haveli
Unusaual and mystic! It is a Salim Singh ki Haveli. The top most storeys of this haveli are destroyed yet the surviving structure has peerless grandeur. You indeed would be enticed with the intricate workmanship and designed Jharokhas.

Patwon ki Haveli
Patwaon Ki Haveli is another dimension to the Jaisalmer havelis. It is a five storey edifice which was constructed in 1800 AD and 1860 AD. This is the largest of its kind and is one of the grandest mansion in Jaisalmer.

Nathmal ki Haveli
Nathumal Ki Haveli is two identical looking portions which are combined by a common facade. The projected balconies are the sheer example of Jeweller's art applied to stone carvings.

Bada Bagh
This is a 300 year old Jaisalmer Haveli. It has a beautiful blue cupola roof with carved brackets in the form of peacocks. This is an amazing mansions in yellow stone and has an amazing projecting balcony on the top storey.

Renovated streets and houses of Jaiselmer

The city is currently undergoing quite extensive renovations, and particularly the small streets on the way to the Patwon-ki-Haveli have been redone with many houses now showing off exquisitely carved front sandstone walls. The houses are much more intricate and interesting from street level than they appear from the fort.

Vyas Chhatri
Also known as the city of Sunset Point, it houses the cenotaph of Sage Vyas who compiled the famous epic Mahabharata. Moreover, it gives you a bird's-eye view of the picturesque beauty of Jaisalmer.

Desert National Park
Located at a distance of 40 kms from Jaisalmer, Desert National park is a perfect example of unusual ecological bio diversity. Thar desert is the teeming with wildlife and have some resident species which include Chinkara, Hare Desert fox, black buck, wolf and desert cat.

A Camel or Jeep Safari is the most preferrd thing to do while you are in Jaiselmer. Jaisalmer is a lovely and very relaxing place with a great small-town feel. Plan at least two days, and add time if you want to explore the desert. Go for a stroll, visit the palace and do the Camel safari (trips available from a few hours to 14 days). If you do not feel remotely attracted to camels, try a jeep safari into the desert to see the scenery and watch the sun go down. Below the fort are several magnificent havelis with intricate stone carvings. Several can be visited for minimal charges and are well worth seeking out. It's more comfortable to wander in the city before 9:00 am when there are not many tourists, fewer shops opened and still fresh air.

Camel safaris are organized by Traveltoexplore by the help of its travel partners in Jaiselmer. A camel safari trip can be of two to seven days and if someone wishes to extend it, it can go up to one month. Short trips give a glimpse of the desert to the tourists. Jaisalmer is the land of desert and most of the camel safaris start from this city. In most of the trips, one camel is allotted to one person and a camel cart is also provided with the group which carries all the food, tents and other supplies.

Desert Festival
The Desert Festival is one of the most popular cultural events on the annual festival calendar of Rajasthan. The colorful event is held every year at Jaisalmer in the months of January/February. The festival is a showcase of the performing arts and crafts of Rajasthan. The melodious tunes and rhythms of the folk musicians and amazing folk dance performances by renowned artists create a spellbound effect on spectators. The event is organized on the famous golden sand dunes at Sam near Jaisalmer. Colorful craft bazaars set up for the occasion are an added attraction of the festival.

Jaisalmer airport is located 5km from the city and is well connected by air with New Delhi, Jaipur and Jodhpur. However, it is managed by the Indian Air Force and is functional only from September to March. So Jodhpur airport at a distance of about 285 km is the better option. Delhi is the nearest international airport.

Jaisalmer’s railway station is 2km east of the city. The city is well connected by rail with Jodhpur as well as other major cities of India including Agra, Jaipur, New Delhi and Mumbai.

Bus runs to and from Jaisalmer by Rajasthan State Road Transport Corporation on daily basis. Jaisalmer is connected to the cities of Gujarat and Rajasthan by ewll maintained roads. The two main bus stands in Jaisalmer are Golden Bus Terminal and Roadways. The bus and taxi services are frequent for the visitors. 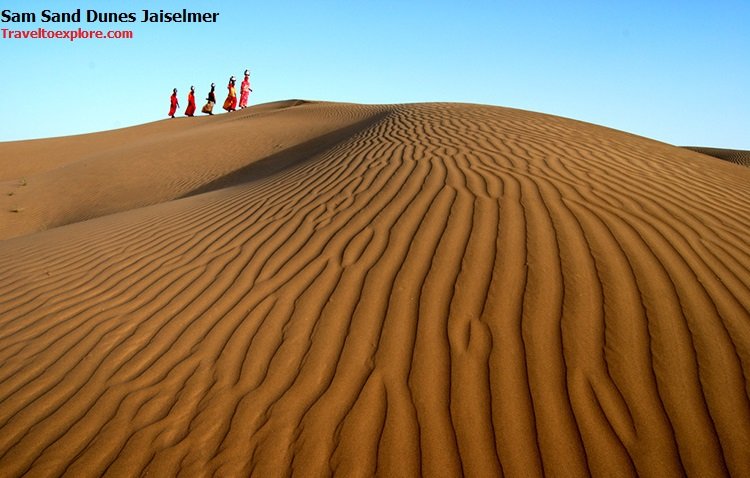 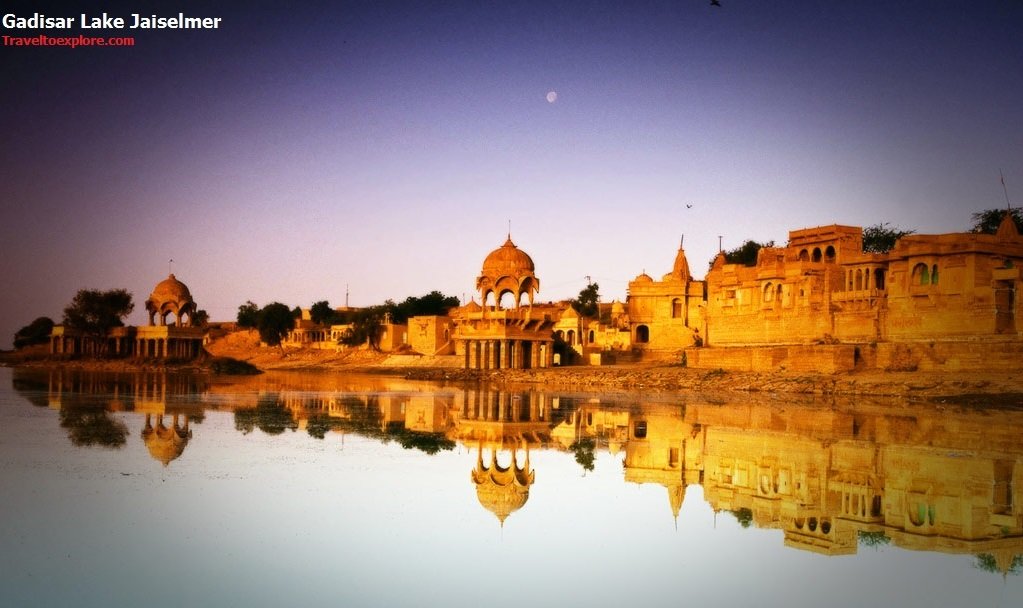 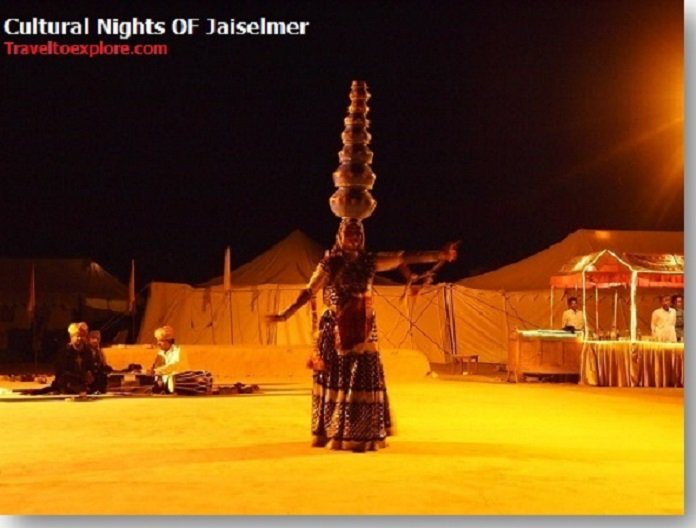 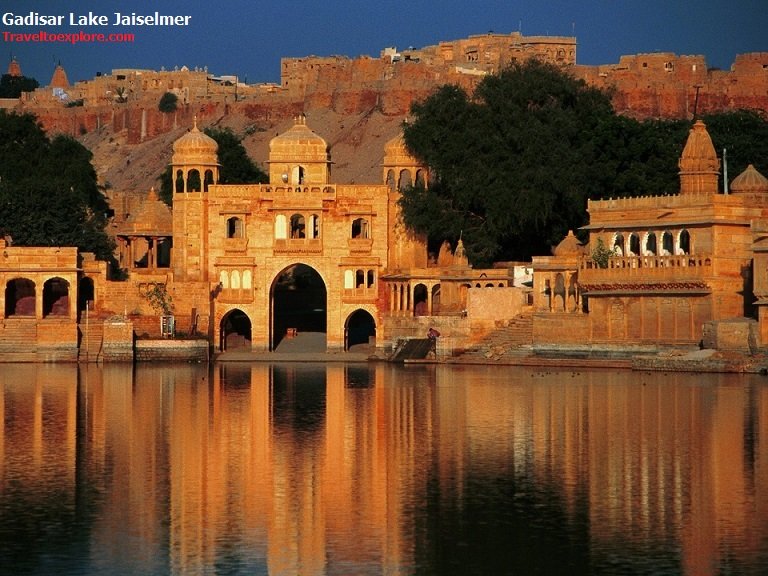