11 km north-west from Ajmer, in the state of Rajasthan, on the desert fringe lies a tiny tranquil town called Pushkar, along the bank of the picturesque Pushkar Lake. One of the holiest and oldest cities of India, Pushkar is a favored destination for thousands of tourists and devotees. As per legends, Pushkar boasts of over 400 temples, ghats and palaces revealing an entirely different picture of the city. An important pilgrimage spot for the Hindus, Pushkar is home to the only temple of Lord Brahma in the country as well as the world. Lord Brahma is known as the creator of the world, as per the Hindu mythology.

Pushkar is situated at a height of 510 meters, surrounded by hillocks on three sides. The 'Nag Pahar', or the Snake Mountain, forms a natural boundary between Ajmer and Pushkar. The sleepy, lakeside settlement of Pushkar is of great mythological significance. According to Hindu mythology, lotus petals incidentally fell from the hands of Lord Brahma on the ground at three places, from where water immediately sprouted, which lead to the creation of three lakes, Pushkar Lake, Madya Pushkar Lake and Kanishta Pushkar. Pushkar is one such place where Lord Brahma performed “Yagna”.

Pushkar Camel Festival is the best time to witness the kaleidoscopic picture of this part of Rajasthan. The riot of colors and liveliness is evident from swirling dancers, tented camps, intricate artwork and towering camels. Thousands of Hindus from across the globe come to Pushkar to take a dip in the holy waters of Pushkar Lake. All in all, Pushkar radiates an ambience of peace and spirituality that casts a lure to visit again and again. Visit Pushkar and catch a glimpse of the unrevealed part of this otherwise drowsy and quiet town begetting a legacy of timeless architectural heritage.

Pushkar has an immense hidden potential as a tourist destination:

The Pushkar fair is amongst the largest cattle fairs in the world.

Amongst the oldest cities in India, with references in mythology and the Mahabharat - Site of the only temple in the world dedicated to Brahma - the creator.

The site of the holiest lake in the country.

52 bathing ghats, which are linked to the lunar calendar, enclose the lake. Each ghat has its own miraculous qualities and powers of healing.

This city of temples has over 500 temples built over different eras with varied architectural styles.

The rose garden of Rajasthan - the essence of the famous Pushkar rose is exported the world over.

The most varied terrain in Rajasthan with sand, rock, hills, vegetation and lakes is ideal for adventure activities.

Proximity to a number of heritage properties in the area.

A number of fairs and festivals in Pushkar, especially on the new and full moon days.

The Dargah of Khwaja Moin-Uddin-Chishti amongst the most sacred Muslims shrines is located at near by Ajmer.

An opportunity to visit local villages still free from commercialization.

Sanganer airport which is 146 km from Pushkar is the nearest airport. It connects Pushkar to the rest of India and the world.

Ajmer junction railway station, at a distance of just 11 km from Pushkar, is the closest railway station. Ajmer is connected with the major cities of Rajasthan and India. Pink City Express and Shatabdi Express are the best trains to opt for while traveling to Ajmer from Delhi and Jaipur.

Pushkar is easily connected to the major roadways and national highways of Rajasthan and India. The Marwar bus stand is linked to places like Delhi, Jodhpur and Bikaner. The other stand is Ajmer bus stand, at a distance of 11 km in the east of Pushkar. Regular buses ply from Pushkar to Ajmer, Jaipur, Indore and Nagda every 15 minutes. 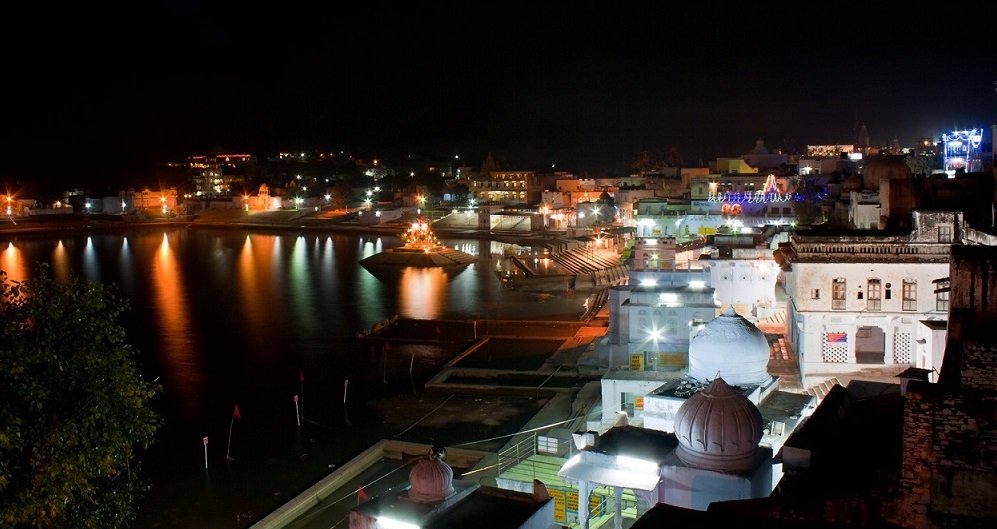 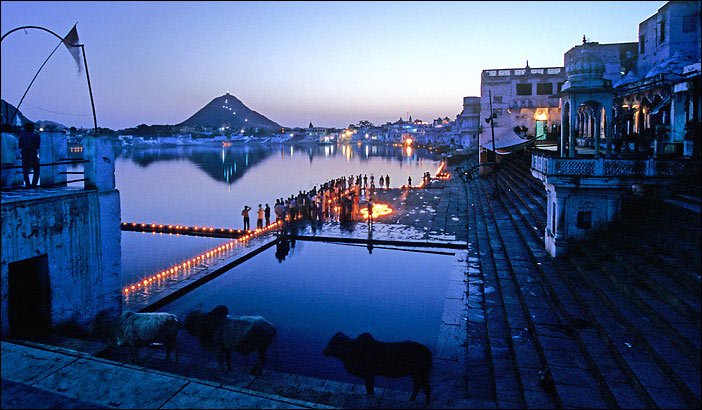