Udaipur, the capital of the former princely state of Mewar is a beautiful city in Rajasthan, India. Udaipur city is also referred to as the "Venice of the East", the "Most Romantic City of India" and the "Kashmir of Rajasthan". Udaipur the “City of Lakes” is one among the most romantic and most beautiful cities of India. The city of Dawn, Udaipur is a lovely land around the azure water lakes, hemmed in by the lush hills of the Aravalis. A vision in white drenched in romance and beauty, Udaipur city of Rajasthan state is a fascinating blend of sights, sounds and experiences - an inspiration for the imagination of the poets, painters and writers. Udaipur's kaleidoscope of fairy-tale palaces, lakes, temples, gardens and narrow lanes strewn with stalls, carry the flavor of heroic past, epitomizing valor and chivalry. Their reflection in the placid waters of the Lake Pichhola is an enticing sight.

Udaipur is a popular tourist destination in India. The lakes, palaces and lively workspaces and culture attract foreign and domestic visitors. It is a favourite marriage destination. Many celebrities, including film stars, business families, politicians chose Udaipur to hold marriage ceremonies and parties. Udaipur have three interconnected lakes - the Fateh Sagar Lake, the Lake Pichhola and the smaller Swaroop Sagar Lake; along with forts, palaces, temples, gardens, mountains and narrow lanes lines withdrawn with stalls, relives the reminisces of a heroic past, valor and chivalry.

Udaipur is a beautiful city, set amidst the Aravalli Ranges of Rajasthan, India. Known for its picturesque lakes, Udaipur also called 'the city of lakes'. The elevated hills and the beautiful lakes make a picture-perfect backdrop to the Udaipur city. Udaipur is regarded as one of the most romantic cities of the World and subsequently, also known as the 'Venice of East'. In context of Rajasthan, Udaipur is the second most-sought after tourist destination of the state, the first being Jaipur. Udaipur had been the capital of Mewar for centuries.

Though termed as the city of lakes, Udaipur has many more attractions that catch the attention of the tourists with their charm. The city boasts of various museums, palaces, gardens, monuments and colourful festivals that allure tourists to visit the city for once. The mighty palaces with their exquisite locations transport you directly into the royal Rajputana era; Lake Palace, for one, has been accredited for being one of the most romantic places all across the globe. The massive forts of Udaipur grab the interest of people with their sheer structure and architecture. The beautiful temples create a sense of aestheticism with their spiritual ecstasy.

The lakes acting as oasis under the scorching sun propels a sense of calm along with reminding you at once of the city of Venice. The festivals, altogether colourful and lively, with their frenzies and huge scope cast a spell worthy enough to keep you too in spirit for days to come whereas the serene gardens, which lend the city its second adoptive name- The Garden City of Rajasthan, are an epitome of how the natural order manages to make its way to flourish even in the desert, uninhibited. Last but not the least, anyone even a little interested in digging in the past too is fed by through artefacts and what not that still survives in the heart of the city through museums.

Udaipur is undoubtedly a dream destination for a romantic holiday. Every year, thousands of tourists come from all over the globe to visit this romantic city. Udaipur is easily accessible from all the major cities of India including Delhi, Mumbai and Jaipur. So, if you are tired of your hectic schedules and daily routine, then plan a trip to the city of lakes to lighten up your worries and tensions. A tour to the romantic city of Udaipur would certainly become an unforgettable part of your memories and you will cherish these memories throughout your life.

How did Rajasthan's royal rulers survive after India became a democracy, and their states were merged into the Union of India? They converted their palaces into hotels and tourist attractions in order to generate an income. Udaipur's City Palace Complex, belonging to the Mewar royal family, really sets the standard as far as such heritage tourism is concerned. This all encompassing destination incorporates two authentic palace hotels and the City Palace Museum. A collection of vintage cars and Jag Mandir, a pleasure palace in the middle of Lake Pichola, add to the interest. Definitely don't miss any of it! It's the largest palace complex in Rajasthan.

Another place of architectural splendor, Bagore Ki Haveli was built in the late 18th century by the Prime Minister of Mewar. It's located on the edge of Lake Pichola, at Gangaur Ghat (which is a relaxing place to sit by the water). After five years of restoration work, the Haveli was converted into a museum. It's a joy to wander through and provides a further fascinating look into the lifestyle of the royal family. Inside there are more than 100 rooms, courtyards and terraces, many with beautiful frescoes and fine mirror work. Royal paintings, costumes of the royal kings, personal items, and traditional Rajasthani arts and crafts are on display. There's also a puppet gallery, and turban collection with the world's biggest turban. The Haveli is open daily from 10 a.m. to 7 p.m. Don't miss the folk dance performance and puppet show there from 7 p.m. to 8 p.m..

Lake Pichola and Fateh Sagar Lake (to the north of Lake Pichola and connected by a canal) are the most popular of Udaipur's man-made lakes. A boat ride on Lake Pichola gives a whole new perspective to the city, especially the City Palace Complex. Boats depart from Rameshwar Ghat in the City Palace gardens (you'll need to pay 25 rupees to get inside the City Palace if you're not staying there). A one hour trip costs 300 rupees (or 500 rupees at sunset) including a stop at Jag Mandir. If you want a cheaper option, the boat stand at Lal Ghat offers 30 minute boat trips for 200 rupees at any time of the day, although Jag Mandir isn't included. You can also explore Fateh Sagar Lake by hiring a paddle or motor boat from the bottom of Moti Magra hill.

Udaipur has many vantage points for photography but arguably the best one is Ambrai Ghat, especially at sunset. It's located directly opposite the City Palace and also fronts the Lake Palace hotel, so you have an unsurpassed view of both as their lights are turned on. To get to there, head to the Hanuman Ghat area and keep walking along the road that runs parallel to Lake Pichola as far as you can, past the Amet Haveli hotel and Ambrai restaurant. Do be aware that you might feel a little uncomfortable, as Ambrai Ghat is a popular local hangout for couples.

The Fort Sajjangarh also known as Monsoon Palace can be seen from Udaipur, perched high on a hill above the city. As its name suggests, it was a favored destination of the royal family during the monsoon season. The Palace belonged to the Mewar royal family until it was placed in government hands. After being closed for quite a while, it's been restored but isn't very well maintained. The Palace is a popular sunset spot due to its unsurpassed view over Udaipur. Those who are familiar with James Bond's Octopassy movie will also recognize the Palace as the home of the principal villain, Kamal Khan. The drive to the palace takes around 30 minutes and passes through the Sajjan Garh Wildlife Sanctuary. Entry fees are payable. Auto rickshaws aren't allowed to enter the Wildlife Sanctuary so it's best to hire a car (500 rupees) or take the special minivan that departs from Gangaur Ghat at 5 p.m. daily (cost 200 rupees per person).

This imposing white Hindu temple, with intricate architecture and carvings, is an unmissable landmark in the Lal Ghat area near the entrance to the City Palace. It was built by Maharana Jagat Singh in 1961 and houses a black stone idol of Lord Jagannath (an incarnation of Lord Vishnu). The highlight there is the evocative aarti (worship ceremony) every sunrise and sunset.

Red cable cars ferry sightseers on short (five minutes one way) trips up the hill from Deen Dayal Park at Doodh Talai (next to the Shiv Niwas Palace hotel) to Karni Mata temple. There's a viewing platform there and it's another popular spot for seeing the sunset over the city. Tickets cost 72 rupees for Indian adults and 300 rupees for foreign adults. Tickets for children under 110 centimeters tall cost 36 rupees and 150 rupees, for Indians and foreigners respectively. Do be aware that the line and waiting time to buy tickets can be lengthy at times.

Sukhadia Circle is abeautiful garden and large fountain surrounded by a pond. Nice place for children with boating facility, over years it developed for outing and picnic spot for tourist and locals both.

You will find lots of eating joints developed like Mumbai’s chopati around Sukhadia Circle that also makes it a very happening place . It named after the first chief minister of Rajasthan, Mohan Lal Sukhadia who belongs to Udaipur.

Shilpgram (meaning "craftsmen's village") is a rural arts and crafts complex, located three kilometers from Udaipur and set up by the government in 1986. It showcases rural life and traditions from Rajasthan, Gujarat, Maharashtra, and Goa. The complex has huts from each of the states, incorporating their distinctive architectural features. Artisans also sell their wares and perform folk dances. Horse rides and camel rides are offered as well. The complex really comes alive during the 10 day Shilpgram Arts & Crafts Fair in late December. Otherwise, although it's a great concept, it tends to be sadly rather lackluster.

The Garden of the Maidens’ as it literally means, Saheliyon ki Bari was constructed by Maharana Bhopal Singh. Situated in the northern part of the city, this exquisite place was built for the maids who accompanied the Princess to Udaipur (reckoned to be part of the dowry). Saheliyon kI Bari was one of those places where the maids could make merry, sing, dance and indulge in recreational activities. The garden is festooned with well-maintained fountains, kiosks, marble elephants and a delightful lotus pool. It is one delightful place that is a must visit in Udaipur.

Eklingji Temple is one of the most famous temples of Rajasthan and is located at a distance of 22 km from Udaipur. The temple is dedicated to Lord Shiva and was built in 734 A.D. by Bappa Rawal. The architecture of the temple is worth praising; it is a double-storied temple that looks magnificent with its pyramidal style of roof and distinctly carved tower. Inside the main temple is a huge pillared hall or ‘mandap’ and on entering the hall one can see a silver image of Nandi. The temple also boasts of a four-faced idol of Eklingji (Lord Shiva) which is made out of black marble and is of the height of around 50 feet. The Shivlinga (The phallic form of Lord Shiva) is garlanded by a silver snake and is also the major attraction for devotees. 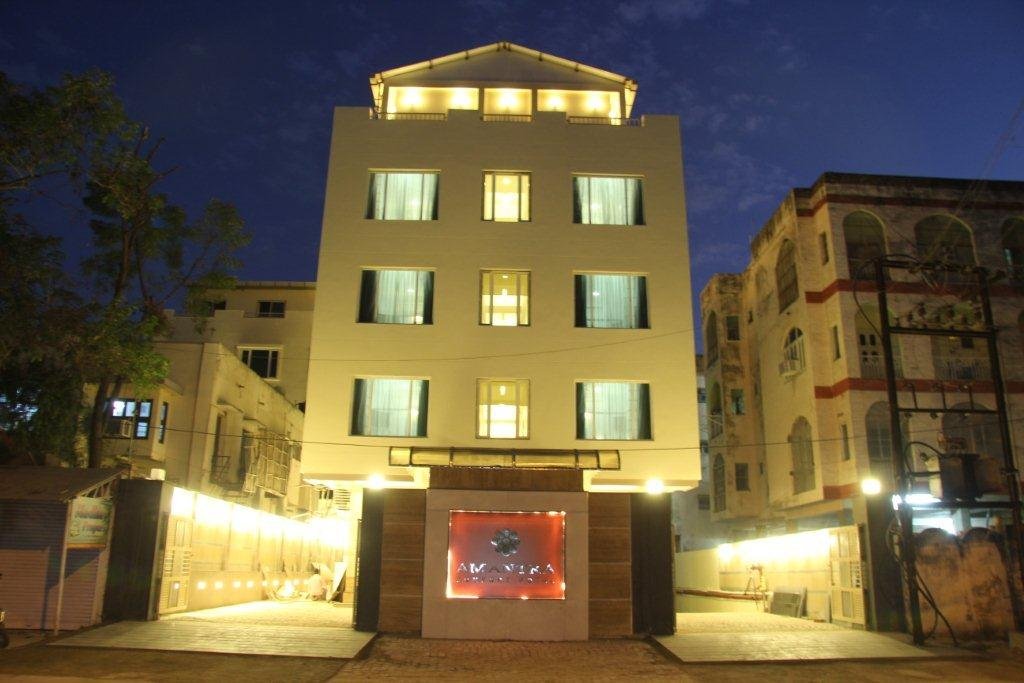