The world-renowned temples of Angkor are situated in the north-western province of Siem Reap. There are few places anywhere on earth to match the splendor of Angkor Wat. As the largest religious monument in the entire world, it is little wonder the Angkor Wat temple itself is the most visited of the temples and most photographed. Originally constructed as a Hindu temple by the Khmer Empire, Angkor Wat temple eventually became a Buddhist temple by the 12th Century. Around the complex you will find endless bas-reliefs (2,600 feet to be exact), depicting the famous battles and scenes from battles.

A visit to Cambodia is recommended or may even be de rigueur for any Indian with an interest in the erstwhile history of India. For no where in the world outside India one can see the glory of its past splendour so well exhibited as in Cambodia. There are several hundred Hindu and Buddhist temple ruins throughout the countryside, especially around the town of Siem Reap near the large lake Tonle Sap. Here is where the splendid temple Angkor Wat has stood for nearly nine hundred years.

Pre-history of Cambodia starts with the legendary Khambujaraja, a Brahmanical king of India, who had come to the region and faced adversity from a beautiful lady on the mountain. After a brief fight between them, a truce was drawn and the beautiful lady, Mero by name, married Khambuja. The country they jointly ruled was called Khambujadesa and their descendants were called the Khmer people. Khambujadesa later became Kampuchea and then Cambodia. Indian influence in the region began in the first century C. E. They traded goods with Khmer by way of sea, when spice and silk trade had flourished. Both Indians and Chinese exerted their influences on the local people but Indian culture took a firm foothold, perhaps through the efforts of Brahmin priests. The rulers of the time had a suffix of ‘Varman’ to their names, similar to the Pallava kings of Kanchipuram.

The glory of Cambodia and its temples began in earnest during the rule of Jayavarman II beginning 802 C. E. It is thought that he came from the royal court in ‘Java’ to conquer smaller Khmer states. He declared a unified and sovereign Khambujadesa, independent of Javanese influence. This was when the Angkor era in the history of Cambodia was born. He named his capital city Hariharalaya and introduced ‘linga-cult.’ to his kingdom. The cult of Devaraja or the God King (the terrestrial counterpart of the celestial being) was also introduced by Jayavarman II. The capital stayed around the large Lake Tonle. Thirty years after Jayavarman II’s death, his successor Indravarman I constructed the first major temple in his honour. From then on the rulers busied themselves in building temples using bricks, sandstone and laterit.

The temples of Angkor, built by the Khmer civilization between 802 and 1220 AD, represent one of humankind's most astonishing and enduring architectural achievements. . For generations much of the outside world believed Angkor was little more than an exaggeration or an outright fairytale. Today, this UNESCO World Heritage Site is recognized among mankind’s grandest architectural achievements, ranking in importance with the monumental sites of Egypt and those of the Inca and the Aztec in Latin America.  The city where the temple was built, Angkor, is located in modern-day Cambodia and was once the capital of the Khmer Empire. This city contains hundreds of temples. The population may have been over 1 million people. The sprawling main temple built by king Suryaverman in a period of 37 years spreads over a one square mile area with long walls and stories of Hindu mythology are sculpted as bas-reliefs. It is a magnificent temple complex, constructed in the form of mythological Mount Meru - the Hindu center of the Universe. The temple is surrounded by a large moat, representing the ocean surrounding Mt. Meru. The brilliant paint used to enhance the reliefs has faded but the architecture and beauty are still preserved. The sheer magnitude of the temple complex is impressive.
All the gods of the Hindu pantheon are represented in temple sculpture. Shiva and Vishnu were held in high esteem. Ramayana and Kurukshetra war are depicted on entire walls of stone sculptures. A masterpiece bas-relief is that of the legendary churning of the ocean by the gods and demons.
Sculptures of Vishnu on the back of his vessel Garuda or reclining on the serpent Ananta and Shiva with his consort Parvati are repeated in many temples. Also seen are Hanuman and Ganesh, along with many seductive figures of Apsaras - reminiscent of Dev-dasis, the consorts of the Gods.

Built by Jayavarman VII, the temple stands in the center of Angkor Thom. With its 54 towers and 216 faces of Avalokiteshvara, this temple looks best in the morning just after sunrise or at the end of the afternoon when the sun shines on the faces. The temple was built on 3 levels, the first 2 are rectangular, while the 3rd is circular.

Ta Proham is Still covered by the jungle, this place is exactly as they found it. Ta Prohm makes it easy to imagine how the whole complex looked when it was re-discovered in 19th century. This is the temple made famous in Tomb Raider. If you come early, you can avoid the crowds who arrive mid-day. It’s the second best complex behind Bayon.

A 1000 foot terrace of elephants. It was used as a giant viewing stand during public ceremonies, royal ceremonies, and so on. Many lions decorate this enormous path as well. Now it’s surrounded by camera-wielding tourists, and one of the busiest sites here. We suggest visiting late or early to avoid the crowds, which get overwhelming.

This temple is located about 12 miles north of Angkor. The name means “Citadel of the Women” and refers to the size and delicacy of the decoration in the complex. Unlike the major sites at Angkor, this was not a royal temple. There are exquisite decorative carvings in pink sandstone and the miniature proportions are a major highlight of Banteay Srei.

A huge baray surrounded this temple complex during its prime. Because it was encircled by water and was like an island, there was no need for enclosures or moats that became customary for temples in Angkor. East Mebon has five towers- make sure to climb the central platform to the towers, and check out the intricate stonework.

Preah Khan is one of the largest sites in the Angkor temple complex. Not only was this site an important temple, but it also appears to have been a large Buddhist university with over one thousand teachers at one time. It has remained largely unrestored, as evidenced by the many trees growing around the ruins and mossy stones left laying everywhere. The site was a previous palace of Yasovarman II and Tribhuvanadityavarman, and historians believe a famous battle was fought on this site.

About 2000 feet south of the East Baray lies Pre Rup, built by Rajendravarman as his capital after re-establishing Angkor once he took over as king. Pre Rup was at the center of a city that has long since vanished. You can climb the steep steps up to the three tiers of the pyramid.

This was the first temple to be built in the ancient city of Hariharalaya. It lies about 10 miles southeast of the main temples at Angkor. Today, there are six small brick towers that sit atop a sandstone base.

Commonly known as ‘The Royal Baths’, this spot was once a major bathing spot for every living thing, elephants aside, in the area. Today it is the most popular place for local children to swim.

This temple has the same style, structure, and founder as Ta Phrom. It is almost like its little brother. The major feature that sets it apart is a huge tree that grows atop the eastern Gopura. It is slowly destroying the building, but it makes for amazing photo opportunities. It’s the temple normally featured in movies and photos.

On the road between Angkor Wat and Angkor Thom, you can find a single tower that was built by Harshavarman I (910-922). It’s one of the few ruins accredited to him, and he had it built to honor his father who was responsible for the construction of Phnom Bakheng.

Terrace of the Leper King

This seven-layer terrace was built in the 13th century and was named after the god of the underworld, whose naked statue perches on top. Keep an eye out for the secret passage-way that runs from the southwest to northwest side of the structure.

During the rule of Udayadityavarman II, several lingas were carved on the riverbed of Kbal Spean river in Phnom Kulen mountains. Today it is known as the ‘River of thousand lingas’ and is a major tourist attraction in its own kind. It was believed that the water that flowed over the countless lingas of the river would fertilize the rice fields below. A short hike up the mountain will take a visitor to the place of thousand lingas in Kbal Spean river. It is about 51 Km northeast and 1 hour drive from Angkor.

A fifteen-day tourist visa can be obtained at US$ 30 upon arrival at Pochentong Airport. Visitors should bring along at least 4 photos, and sign the visa applications form upon arrival. 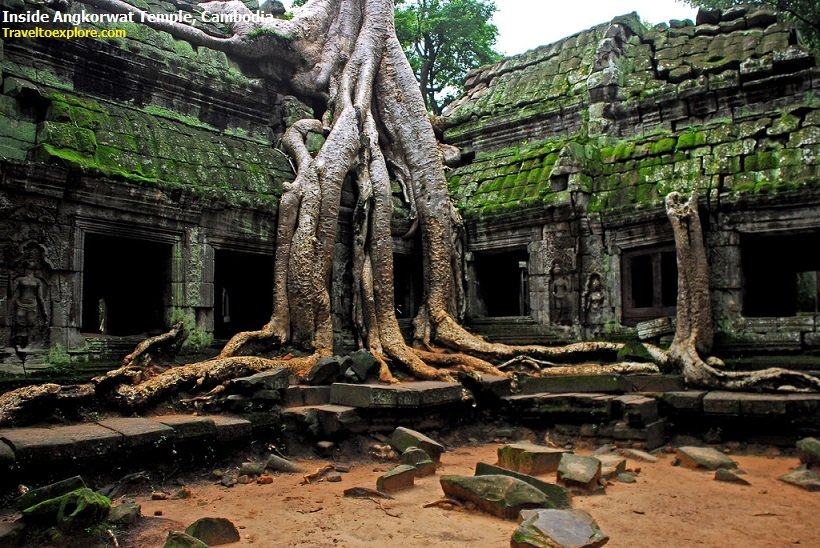 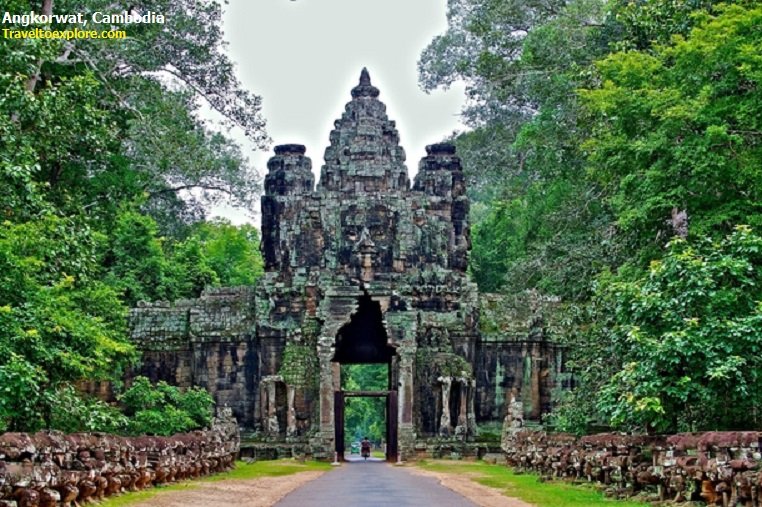