Wreathed in clouds, Gangtok, the capital city of Sikkim is located on a ridge at a height of 5500 feet. With a spectacular view of the Khangchendzonga, the town provides the perfect base for travel through the state. Once an important transit point for traders traveling between Tibet and India, it is today a busy administrative and business centre and presents an interesting mix of cultures and communities.

Gangtok is a cosmopolitan town which offers the tourist all possible amenities. Hotels are available in a range of prices along with a variety of eateries serving cuisine for all tastes. Shopping complexes, cyber cafes, night clubs and pool parlours abound for those so inclined.

MG Marg, the main street of Gangtok town is a great place to chill out. The countrys first litter and spit free zone, no vehicular traffic is allowed into the marg. You can sit at the Titanic Park or at the various benches stretched across the mall and take in the carnival like atmosphere, especially during the tourist season. The Mall is lined with shops on both sides of the road so shopping becomes an added pleasure.

MG Marg is also the venue for the annual Gangtok Food and Culture festival held in December each year when Sikkims multi-cultural cuisine, along with music and dance performances are showcased. This event attracts a large number of locals and tourists each year.

For a birds eye view of Gangtok take a ride on the bi-cable Zig-back ropeway. The one kilometre ride from Deorali to Tashiling Secretariat costs Rs. 30 one way and is completed in 7 minutes. Each cabin has the capacity to ferry 25 people at a time. The ropeway has been fitted with fully computerized modern safety mechanism of international standards. On clear weather the ride offers a great view of the Khangchendzonga range apart from an overview of Gangtok town and the valley below. After you get off at Tashiling Secretariat you can walk to the Ridge Park and soak in the beautiful surroundings as well as visit the ongoing Flower Festival held just below the park.

For a view of Gangtok and all its surrounding, one can got to Ganest Tok situated on a ridge at a distance of 7 kms from Gangtok. From this Spot one can get a view of sprawling Gangtok town, while across the hills Mt. Khang-chen-Dzonga and Mt. Siniolchu loom over the horizon. A cafeteria serves hot tea, coffee and snacks. The view from here is truly breathtaking with snow peaks providing the perfect backdrop for a panoramic view of Gangtok town.

Hanuman Tok, a temple dedicated to Lord Hanuman, is situated at an altitude of 7200 feet at a distance of about nine kilometres uphill from Gangtok on a blissfully calm and quiet hilltop. The location is completely free from the pollution of city life. Apart from the clear view of the peaks surrounding Mount Khangchendzonga, some portions of Gangtok town, one also gets a bird's eye view of the Selep water works, which supplies drinking water to Gangtok. Adjacent to this area is Lukshyama, the royal cremation ground having stupas and chortens. Here the mortal remains of the erst-while royal family members of Sikkim are cremated.

The beautiful Tsomgo Lake lies 35 km on the Gangtok-Nathu La highway. It is also known as Changu Lake and the water body is situated at an elevation of 12,000 feet.

The largest monastery in Sikkim, Rumtek Monastery is the seat of the Karmapa Lama, the third highest monk in Tibetan Buddhism. It also serves as one of the most important seats of the Kagyu (Black Hat) sect of Tibetan Buddhism outside of Tibet and is also known as Dharmachakra Centre.

Located about 23 km from Gangtok, the monastery was built by the fourth King of Sikkim under the supervision of the ninth Karmapa (head of the Karma Kagyu sect).

At an elevation of almost 5000 ft and surrounded by lush green landscape, the monastery is a visual treat besides offering spiritual solace.

The architectural design is almost identical to the original Kagyu headquarters in Tibet. The Kagyu (also called Kagyupa or Kagyud) school is one of six main schools of Tibetan Buddhism.

The beautiful monastery enshrines a golden stupa which contains relics like statues and paintings that belong to the 16th Karmapa. The importance of the monastery increased immensely after China annexed Tibet leading to many religious gurus relocating from Tibet to Sikkim. It houses religious art objects and some of the world’s most unique religious scriptures.

About 56 km east of Gangtok, it is located on the Indo-China border and is perched at an altitude of 14,000 ft. This hill top has earned the reputation of being one of the most exotic places and a must visit tourist destination in Sikkim. Nathu La Pass is the only place in India where you can see the Chinese soldiers across the International Border. Photography is strictly prohibited. The four BPM are: Chushul in Ladakh, Nathu La in Sikkim, Bum La Pass in and Lipulekh Pass  close to Qiang. NAthula was closed for the visitors due to some reasons. After a decade of talks, Nathu La was opened on 6 July 2006 and the date of its reopening coincided with birthday of the reigning Dalai Lama.

Lachung is a popular town in Sikkim. At an elevation of 9600 feet (3000m), Lachung is approximately 125 km from Gangtok, the capital of Sikkim. Lachung is inhabited by Lepcha and Tibetan descendants. Apart from the snow-capped peaks, it also offers skiing and trekking path for those who seek adventure. It houses the historic Lachung Gompa monastery, which has some ancient inscriptions.

Situated about 78 km from Gangtok, Namchi is famous for its Buddhist monastery, scenic locales and as a bio-diversity hotspot. It is also renowned for housing the world’s largest statue of Padmasambhava or Guru Rinpoche, the patron saint of Sikkim.

Nestled among high mountains at about 1675 m above mean sea level, the town offers panoramic vistas of the mountain ranges and the valley below. Namchi, which means ‘top of the sky’ in Bhutia language, functions as the headquarters of South district of Sikkim in North East India. Namchi is the second most populated district in Sikkim.

Namchi attracts thousands of visitors and is fast becoming a tourist destination. Pilgrimage centres, natural wonders and its bio-diversity has played a crucial role in tourists flocking to Namchi. Namchi offers unmatched views of the Rangit valley and Khangchendzonga (also called Kanchenjunga), the third highest mountain in the world.

The Buddhist monasteries, the pristine valley and Himalayan mountain range add a mystic aura to Namchi. The folklores of Namchi have only added to the mystic charm of Namchi.

By Air The airport nearest to Gangtok is about 124 kilometres away in Bagdogra, West Bengal. From the airport, you can hire a shared taxi or a private vehicle that will get you to Gangtok in a matter of two hours. The drive from Bagdogra to Gangtok is absolutely stunning with gorgeous mountains and River Teesta as your backdrop.

From Bagdogra, you can also take a TSA helicopter to get to Gangtok in just 20 minutes. However, their services depend on the weather conditions. Chopper flights also get cancelled on the pretext of insufficient bookings.

By Train The nearest railway station to Gangtok is about 148 kilometres away in New Jalpaiguri in Siliguri. The station is well-connected to major cities like Kolkata and New Delhi. From New Jalpaiguri you can take a taxi to Gangtok or go to Siliguri Bus Station and catch a state-run bus to Gangtok, which will take you about 5-6 hours.

By Road Tourists rolling in from nearby places like Siliguri, Darjeeling, Kalimpong and Kolkata prefer to drive to Gangtok. The roads are well-maintained, except in a few places. 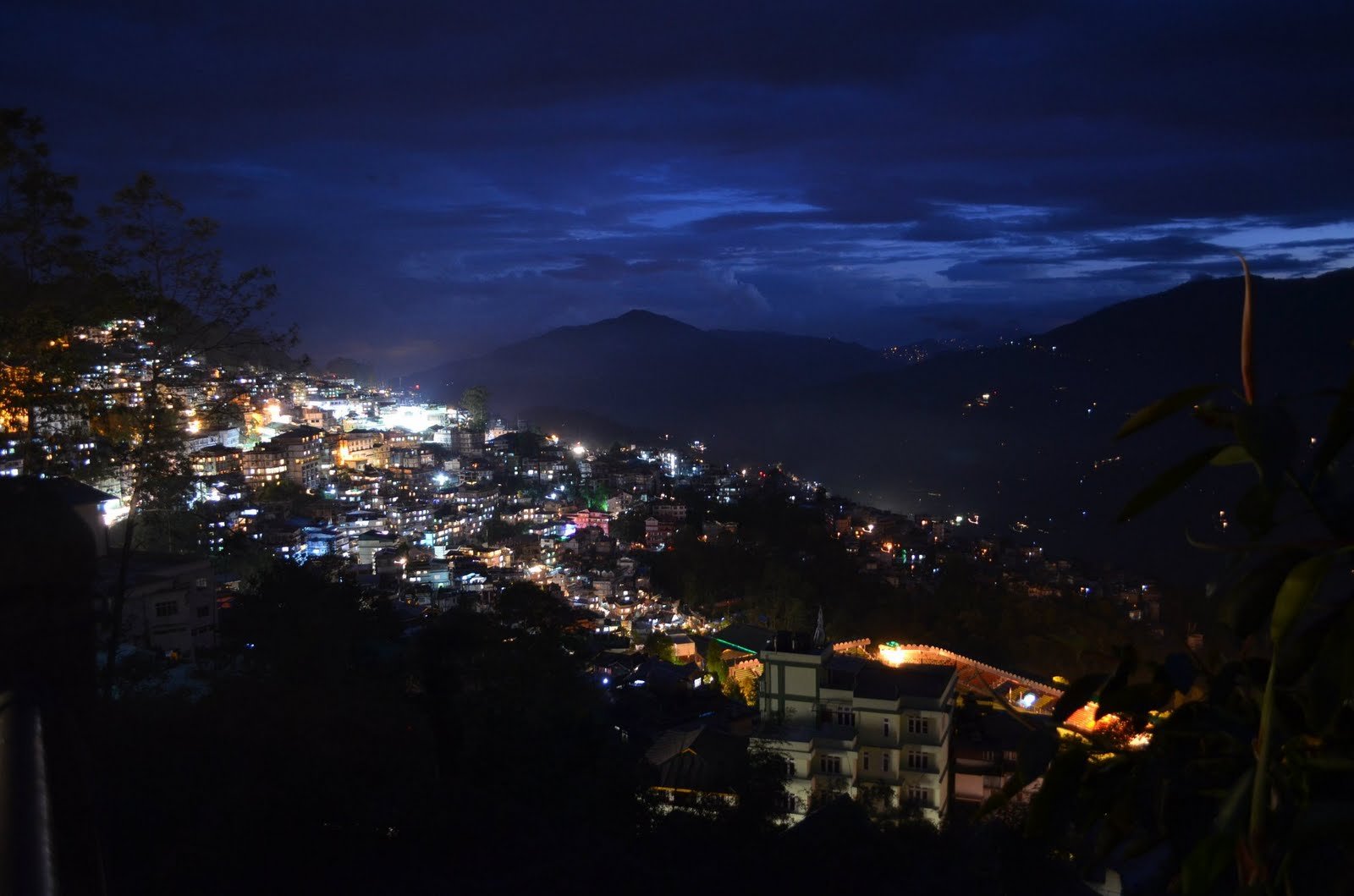 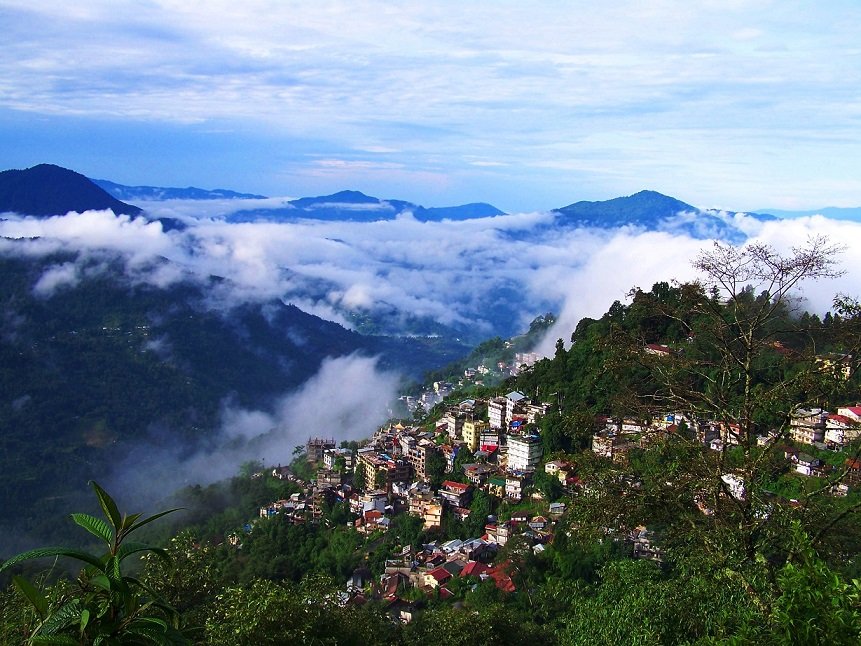 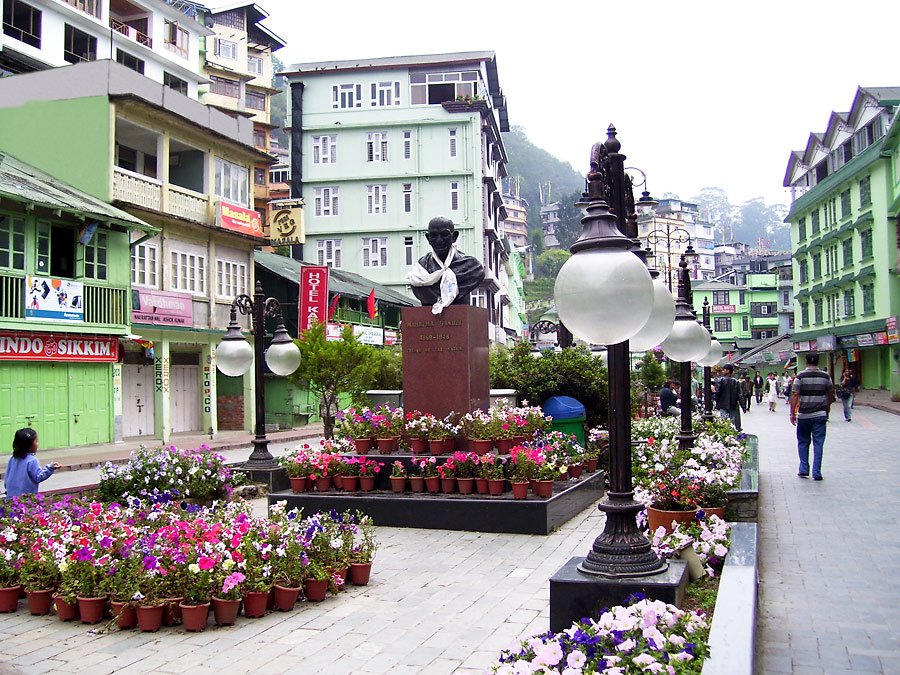 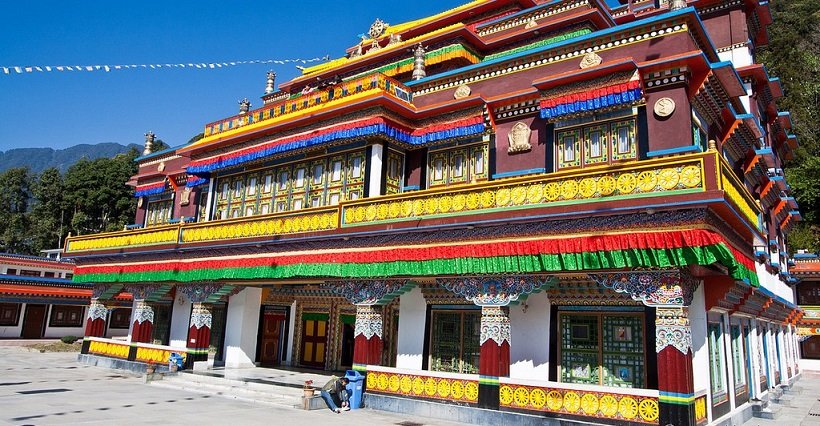 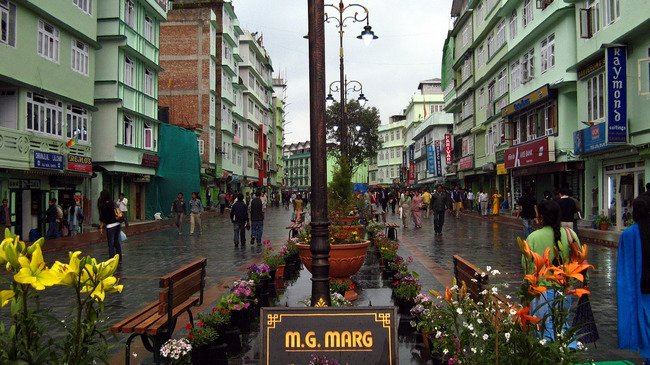 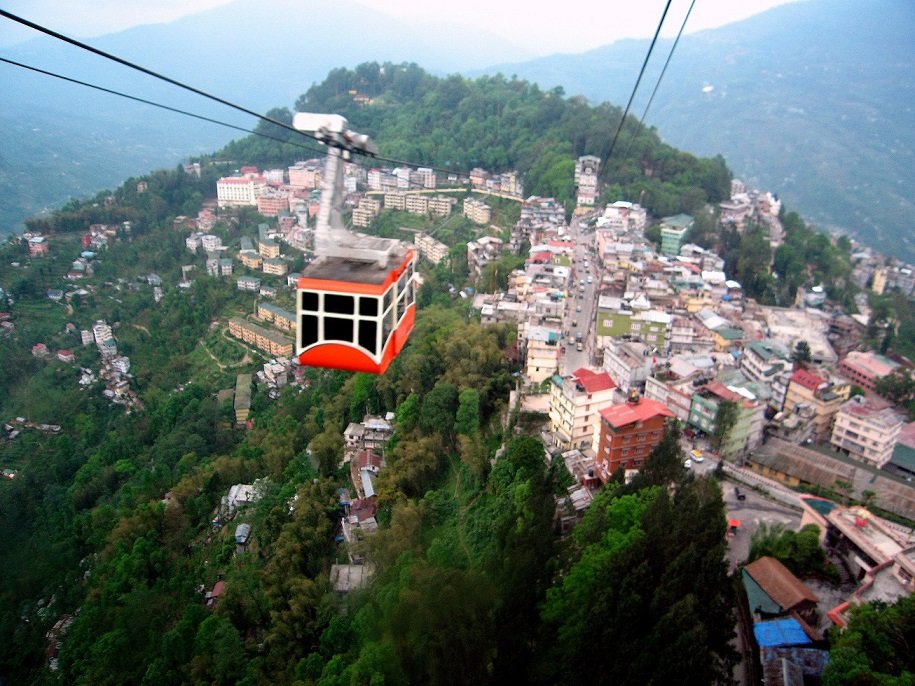