Lansdown is one of the quietest and unspoilt hill station of north India comes under Pauri Garhwal District of Uttrakhand State. Lansdown developed by Britishers when they came to India and was a favourite hill station for them. It named after Lord Lansdown who was the then viceroy of India during 1888-94, originally it known as, Kaludanda, after Kalun (Black) and Danda (Hill) in local language. It also has the command office of Garhwal Regiment of India Army.

It is situated at an average altitude of 1700 meters surrounded by thick pine and oak forest.  It is a charming place for a quiet holiday as it is devoid of the usual hustle - bustle of other hill stations in Uttarakhand. It is also popular among those who would like to go for long walks and treks. Natural trekking routes are available here for both amateurs and expert trekkers. You make take a trek which would last from few hours to few days. The panoramic view of snow covered Himalayan Peaks adds glitter to the beauty of this place. Lansdown is just a perfect destination for people who love to be close to unadulterated and pristine natural beauty. Its a all weather hill station and can be visited any time throughout the year although it receives heavy rains in July and August hence one can avoid coming here during this period.

The Garhwal Rifles Regimental War Memorial at Lansdowne was established on 11th November 1923. Lord Rawlinson of Trent, the then Commander in Chief of India, founded this museum. A major tourist attraction of the destination, this war memorial is located at the Parade Ground. It is one of the few tourist attractions that is visited by almost every traveller coming to Lansdowne. Tourists who are interested in knowing about the Indian army also throng this place.

Regimental Museum is a motivational hall named after the famous Darban Singh Negi. This museum was inaugurated in the year 1983. The Regimental Museum houses numerous antique pieces, belonging to the Garhwal Rifles. The great achievements of the Indian Military has been chronologically set in this Museum.

Garhwali Mess is one of the oldest buildings in the hill station, which was built by the British in January 1988. The mess reflects the rich heritage of the Army and also of the destination in general. It is one of the old and finely preserved heritage buildings of Lansdowne

Tip-In-Top also known as Tiffin Top is situated in the ridge near St. Mary’s Church. This is a popular spot among tourists visiting Lansdowne. From this spot, tourists can get view of the beautiful snow covered Himalayas and some parts of Tibet. You need to walk a little to reach this place from the place you park your car. But the moment you reach there, it's a beautiful view of the mountains all around. This place is also known as sunset point.

Bhulla Lake or Tal is an artificial lake dedicated to the young Garhwali youth of Garhwal Rifles, who rendered help for construction of this lake. This tourist attraction gets its name from the Garhwali word, Bhulla which means younger brother. Here the tourists can also enjoy boating and paddling. A beautiful park, bamboo machan and fountains have been erected here for entertainment of tourists.

This is a self balancing stone which believed to be placed in such a manner by Bhim during the Agayat Vas of Pandavas. Though this 15 MT (15000 Kg) rock can easily be made wobble on its axis but never slides down the slope.

Durga Devi Temple is located at a distance of around 25 km from Lansdowne, on the bank of River Khoh. This temple is located inside a cave and is dedicated to Goddesses Durga and is considered to be one of the oldest Sidh Peeths.

St. Mary’s Church was constructed by Col. A.H.B Hume of the Royal Engineers in the year 1895. This church is located near the Tip-In-Top Point. In 1947, the church was not used any longer as it started to deteriorate. The Garhwal Rifles Regimental Centre converted it into a small museum, housing interesting pictures of the pre-independence era. This museum also houses the audio visual displays of the history of the regiment.

St. John’s Church, located at the Mall Road, is a Roman Catholic Church established in 1936 under the supervision of Agra Diocese. The construction of this church was completed in the year 1937. In 1947, after the British left India, Agra Diocese could no longer administer this church due to the paucity of priests. Since then, this wonderful church has been neglected and disused, and was eventually handed over to the Government of India in 1951.
On 26th April 1980, the property of the church was leased to the Diocese of Bijnor and its possession was transferred on 29th November 1980. The re-erected St. John’s Catholic Church was blessed by Rt. Rev. Dr. Paulinus Jeerakath CMI, Bishop of Jagdalpur on 28th April 1983. Since then, daily prayers are being offered at the church, which is open to believers and non-believers of all faith.

Hawaghar is a serene place in Lansdowne from where tourists can enjoy view of the snow-capped Himalayan Range. This place is also great for trekking, which leads to the Khyber Pass along the road to Jaiharikhal. Tourists, mostly nature lovers, visit the attraction to enjoy the beauty of the serene surrounding.

Lover's Lane is considered to be one of the best treks in the destinations, which attracts several tourists. On one side of the trek is an overcast valley, which renders view of the wonderful Himalayan peaks; while the other side of the trek is guarded with oak and blue pine trees.

Tarkeshwar Mahadev Temple, is situated in the close vicinity of Lansdowne. This temple is located on a very high altitude of 2092 meters from MSL. Lord Shiva is the main deity of this temple. In this temple premises, the festival of Mahashivrati is celebrated on large scale. The greenery and lush forestry around the temple is mesmerizing. Sky-high series of Deodar trees make a natural wall around the temple.

In this place , there is always echo of bells. This temple is located 37 kilometers far away from Lansdowne. A Dharamshala is also operated this time to accommodate the pilgrims.

This place is much visited because of its religious importance and mesmerizing beauty. Main attraction is the location and surrounding of the Tarkeshwar Temple. Snaky way, Pine and Deodar trees, dense forestry, springs and falls, chirping of birds all make a visitor delight and invite him to come at this spot repeatedly.

By Rail
The nearest railway station is Kotdwara at a distance of 41 km.
Two trains run from Delhi to Kotdwara (Mussoorie Express and Garhwal Express). Mussoorie Express is the best train to reach Kotdwar, the nearest railway station to Lansdowne. The train leaves Old Delhi station at 10.20 pm and reaches Kotdwar at around 6 am in the early morning.

Lansdowne is 250 km from Delhi, and 7-8 hrs drive away.
It is situated en route Kotdwara - Pauri road, NH 119. One has to take a right turn from NH 119 at a place where Garhwal Rifles has put a huge signboard by paining the directions on rock. Lansdowne is 81 km from Pauri. 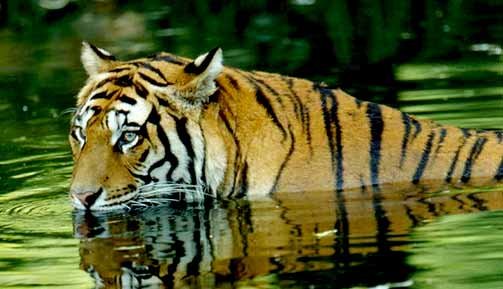